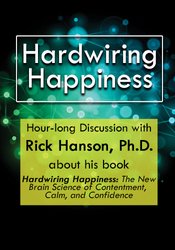 Join Rick Hanson, for this hour discussion about his  book, Hardwiring Happiness: The New Brain Science of Contentment, Calm, and Confidence.

The mind shapes the brain: neurons that fire together, wire together. Positive experiences are the main source of the neural structures underlying motivation, self-worth, the executive functions, good mood, kindness, resilience, and other inner strengths. Unfortunately, most positive experiences are wasted on the brain because it evolved a negativity bias to help our ancestors survive. It’s like Velcro for bad experiences but Teflon for good ones. To solve this problem, Rick Hanson will present the four simple HEAL steps of taking in the good, which turn passing experiences into lasting neural resources to build confidence, focus attention, lower anxiety, and fundamentally, hardwire happiness into the brain.

Rick Hanson, Ph.D., is a psychologist, a Senior Fellow of the Greater Good Science Center at UC Berkeley, and a New York Times best-selling author. His books are available in 28 languages and include Buddha’s Brain (New Harbinger, 2009), Just One Thing (New Harbinger, 2011), Hardwiring Happiness (Harmony, 2016), Resilient (Harmony, 2018), Just One Thing Card Deck (PESI, 2018), and Mother Nurture (Penguin, 2002). He edits the Wise Brain Bulletin and has numerous online programs. A summa cum laude graduate of UCLA and founder of the Wellspring Institute for Neuroscience and Contemplative Wisdom, he’s been an invited speaker at NASA and Google, and Oxford, Stanford, Harvard, and other major universities, and taught in meditation centers worldwide.

Dr. Hanson has been a trustee of Saybrook University, served on the board of Spirit Rock Meditation Center, and was president of the Board of FamilyWorks, a community agency. He began meditating in 1974, trained in several traditions, and leads a weekly meditation gathering in San Rafael, California. His work has been featured on the BBC, CBS, and NPR, and over 140,000 people receive his free Just One Thing weekly newsletter.

He enjoys rock-climbing and taking a break from emails. He and his wife have two adult children.

Financial: Rick Hanson is in private practice. He receives a speaking honorarium from PESI, Inc.

Non-financial: Rick Hanson has no relevant non-financial relationship to disclose.

Be the first to review “Rick Hanson – Hardwiring Happiness” Cancel reply
Digital Delivery
We are using Paypal for our auto-payment gateway.
If you have any difficulty in settle your payment with us, please contact our Customer Service team via:
Skype: [email protected] (Intell Centre Customer Services)
Email: [email protected]
Facebook: https://www.facebook.com/IntellCentre/

$18.00
Start typing to see products you are looking for.
Home
Shop
0 items Cart
My account