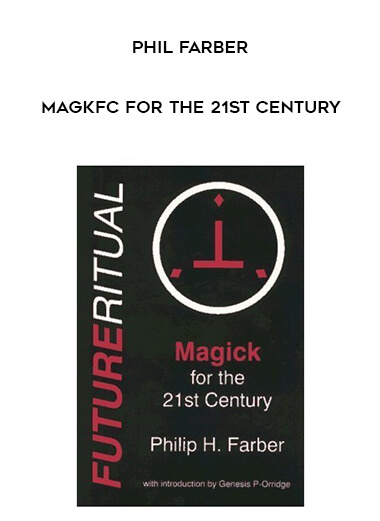 First published in 1995, this unique text on Thelemic magick has been out of print for years!

FUTURERITUAL: Magick for the 21st Century was one of the first modern introductory books to Thelemic magick, and also one of the first (perhaps THE first) to incorporate Neuro-linguistic Programming (NLP) into magical ritual. Through a series of rituals, exercises and meditations, FUTURERITUAL guides the reader into a program designed to develop True Will, knowledge of the unique purpose and direction of the individual through the universe. It offered a new perspective on familiar rituals such as the Lesser Banishing Ritual of the Pentagram, easy-to-follow guidance into more complex pentagram and hexagram rituals, and brand new rituals designed to develop resources, explore altered states and much more.

The book has been “digitally remastered” and now includes 15 pages of new material, including a new preface by the author, two new rituals, a section on cybermagick, and a bonus short story.

“FUTURERITUAL the first magick manual entirely contemporary with modern science and the only one that will really prepare the student for life in the 21st Century.” – Robert Anton Wilson, author Cosmic Trigger and Illuminatus

“FUTURERITUAL is a focused and precise manual that serves as an anchor in the present flood of chaos and possibility. It is also a map that re-MINDS us as individuals, in demystified language and no-nonsense clarity, of the basic orienteering skills and preparations we might require in order to explore effectively and safely neurological dimensions and physical transformations that are now more consistent options for a far greater number of inquiring and searching individuals that at any time previously.
“FUTURERITUAL describes very precisely an essential set of Thelemic magickal considerations and exercises with full instructions and texts. These are invested with the authority of the past, especially that collated and developed by Aleister Crowley and associates. They are also permeated with the considerations and prerequisites of the present, illuminated with wit, linguistic precision, and interdisciplinary parables by the astute and pared commentaries of Philip H. Farber. Most crucial, and most particularly, though: FUTURERITUAL is a point of intersection between past, present and future. It suggests, quite rightly, that the individual has an innate right to explore and to know; to expect the unexpected in all ways, to divine the divine inside and outside their physical vehicle; to accumulate an effective and rewarding system of “magick” by means of which to maximize both their know, and potential comprehension of this state of being we call being alive.” – Genesis P-Orridge, from the introduction

Be the first to review “Phil Farber – Magkfc for the 21st Century” Cancel reply
Digital Delivery
We are using Paypal for our auto-payment gateway.
If you have any difficulty in settle your payment with us, please contact our Customer Service team via:
Skype: [email protected] (Intell Centre Customer Services)
Email: [email protected]
Facebook: https://www.facebook.com/IntellCentre/