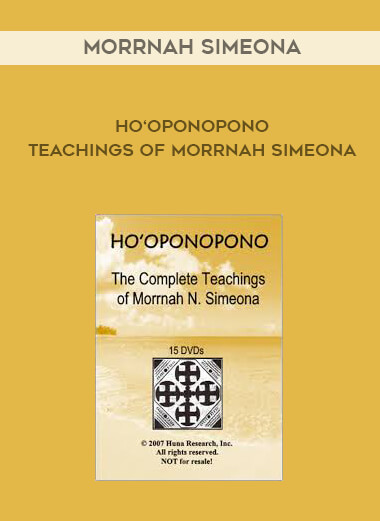 Ho‘oponopono: The Complete Teachings of Morrnah N. Simeona is an entire week’s worth of training that Morrnah chose to present and record, along with her panel of experts, for the first and only time at our Huna Seminar in Punalu‘u, Hawaii in August 1980.

Ho‘oponopono is an ancient Polynesian problem-solving method. If there was a problem in the family (illness, relationship trouble, etc.), the family members would call for a ho‘oponopono. This meant that every living relative was required to attend this meeting (in ancient times, all family members lived somewhere on the island). A respected elder or kahuna (if they had one)—male or female—would be in charge.

If the problem was, for example, a sick child, the elder would investigate the parents first for anything that might be contributing to the child’s illness. The elder would then move on to  the next relative, such as a sibling, aunt, uncle, cousin, grandparent, and so on. Every member of the entire family would be scrutinized until all possible connections to the child’s illness had been revealed and removed. They stayed together until the problem was resolved no matter how long it took.

Morrnah Simeona took that tradition and modernized it so that it could be used by the families of today (as well as groups that feel  like families), even when logistics or circumstances prevent them from gathering together in person. Morrnah’s updated method included absolutely everyone involved or connected in some way to the situation at hand. For example, if the problem was a car accident, a ho‘oponopono would include the victim(s), other people in the car, people who passed by or stopped to help, police officers, medical personnel, ambulance drivers, and so on.

To create a phenomenal week of training on video, Morrnah N. Simeona, a kahuna lapa‘au who stayed true to the ancient ways when she developed her methods, gathered a team of carefully selected experts to be on her panel when she filmed this course in the 1980s. It is presented in its proper cultural context as Morrnah intended, so many topics are covered and integrated to form a cohesive whole. Morrnah Simeona and her handpicked  team of experts do all the training. Again, this was not just the only presentation that Morrnah permitted to be filmed, this was also the only time these experts ever agreed to appear together.

Charles W. Kenn, who was an olohe lua (lua master) and kahuna, as well as a professor, historian, and author. He was honored as a  “Living Treasure of Hawaii” in 1976 for his pioneering work documenting Hawaiian language, culture, and spiritual traditions.

Dr. Abraham Piianaia, who was a steward of native Hawaiian legacy, culture, and language, as well as the inaugural director of the Hawaiian Studies Program at UH Manoa. He was honored as a “Living Treasure of Hawaii” in 1999.

Dr. Kekuni Blaisdell, who was a professor of medicine at the University of Hawaii in Honolulu and was a co-founder of E Ola Mau, an organization of Hawaiian health professionals. His research interests included the spleen and blood disorders, the history of medicine, Polynesian medicine, and Hawaiian health.

Clayton Naluai, who was probably better known for surf music in the 1960s and for starring in the television series, Hawaii 5-0. He was instrumental in preserving traditional Hawaiian energy work.

Dr. Rubellite Kawena Johnson, who was Professor of Hawaiian, Department of Indo-Pacific Languages and Literatures at the University of Hawaii from 1967 to 1993, and an expert in Hawaiian history, culture, and religion.

(This training was filmed by volunteers from a Honolulu TV station using old Beta I technology, so it’s definitely not Blu-ray…but it is the information and historical significance that are important.)

Be the first to review “Morrnah Simeona – Ho‘oponopono – Teachings of Morrnah Simeona” Cancel reply
Digital Delivery
We are using Paypal for our auto-payment gateway.
If you have any difficulty in settle your payment with us, please contact our Customer Service team via:
Skype: [email protected] (Intell Centre Customer Services)
Email: [email protected]
Facebook: https://www.facebook.com/IntellCentre/

$62.00
Start typing to see products you are looking for.
Home
Shop
0 items Cart
My account