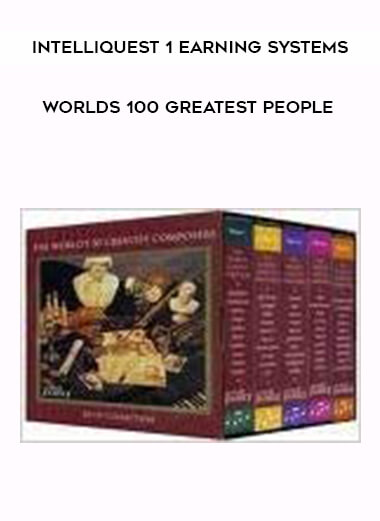 Half-hour summaries of well-known books sound like a good idea for an audio project. Listening to brief overviews of important works of literature, philosophy, and science is a pleasing prospect if the presentations are intellectually stimulating and well performed. InteliQuest’s approach is to offer fairly dry plot summations of books most educated Americans have at least heard of and may even have read. While the program’s promotional literature promises “a wealth of knowledge attained by only a few people who have ever lived,” superficial awareness is about all that most listeners can expect from The World’s 100 Greatest Books. The collection consists of 70 novels and epic poems from writers from Homer to Harper Lee, 15 plays from Aeschylus to Arthur Miller, eight philosophical works from Aristotle to John Dewey, and seven titles dealing with science and civilization from Plato to Oswald Spengler. Each presentation is composed of a quick look at the writer’s life, a brief consideration of how the book fits into the writer’s oeuvre, some historical context, a lengthy plot summary, and some critical commentary at the end. The amount of time devoted to each portion varies from book to book, with many presentations consisting almost entirely of plot summaries. The titles examined present few surprises, with the most daring selection being Dashiell Hammett’s The Maltese Falcon. No writers of color and only a handful of women are included. The 20th century is seemingly lacking in great works since there are no titles by such luminaries as William Faulkner, James Joyce, Thomas Mann, Willa Cather, Virginia Woolf, Samuel Beckett, Tennessee Williams, Vladimir Nabokov, or Gabriel Garcia Marquez. Five plays by Shakespeare are included but not King Lear, while The Sun Also Rises is not among the three selections from Ernest Hemingway. The timidity indicated by the selections is also evident in the presentations, as when the listener is told that while Voltaire’s Candide might seem “boring and intellectual,” its satire is actually as funny as television programs such as Saturday Night Live. Hyperbole abounds, as in the Iliad and the Odyssey being called the greatest works of literature and Charles Dickens being named the greatest English writer. Other quibbles include the editors’ dismissal of the notion that the governess in Henry James’s The Turn of the Screw may be sexually repressed, while no effort is made to place Herman Melville’s Moby Dick in the context of the development of American literature. Mistakes abound as well: The anonymous scholars who have written the analyses confuse “infer” and “imply” and make pronoun case errors. While most of the unnamed readers are adequate, one narrator in particular adopts a condescending tone that is, unfortunately, fitting for the entire project. Not recommended.
Michael Adams, Fairleigh Dickinson Univ. Lib., Madison, N.J.
Copyright 1995 Reed Business Information, Inc.

Be the first to review “Intelliquest 1 earning Systems – Worlds 100 Greatest People” Cancel reply
Digital Delivery
We are using Paypal for our auto-payment gateway.
If you have any difficulty in settle your payment with us, please contact our Customer Service team via:
Skype: [email protected] (Intell Centre Customer Services)
Email: [email protected]
Facebook: https://www.facebook.com/IntellCentre/