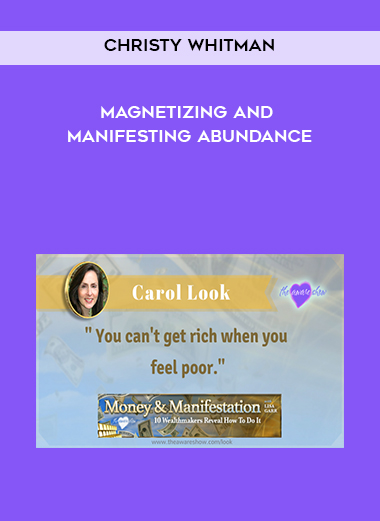 Christy, I have to share this with you: I took the Magnetizing and Manifesting class this past summer and visualized $10k that I was creating for myself….and since this summer, I have had more than the $10K coming my way in different forms and my business has never been so successful! I am so grateful for this awesome program you offer! Thank you!”

Why is it that even after we place our intentions to create success, manage our minds to be more positive, and take the necessary action steps towards our goals, we still don’t receive the level of success we desire?

What you will learn:

During this 4 week course, we will work with the beliefs that hold you back from having the success and abundance that you really do deserve. We will work with all parts of yourself to align your being with success, abundance, well-being, and joy – because that alignment is the first step to manifesting those conditions.

Christy Whitman is a New York Times bestselling author, transformational leader, and author of the forthcoming book The Art of Having It All. She has appeared on The Today Show and The Morning Show, and her work has been featured in People Magazine, Seventeen, Woman’s Day, Hollywood Life, and Teen Vogue, among others. As the CEO and founder of the Quantum Success Coaching Academy, a 12-month Law of Attraction coaching certification program.

Christy has helped thousands of people worldwide to achieve their goals through her empowerment seminars, speeches, and coaching sessions and products. Christy’s life-changing message reaches over 125,000 people a month, and her work has been promoted by and featured with esteemed authors and luminaries such as Marianne Williamson, Dr. Wayne Dyer, Marci Shimoff, Brian Tracy, Neale Donald Walsch, Abraham-Hicks, and Louise Hay. She currently lives in Montreal with her husband, Frederic, and their two boys, Alexander and Maxim.

Be the first to review “Christy Whitman – Magnetizing and Manifesting Abundance” Cancel reply
Digital Delivery
We are using Paypal for our auto-payment gateway.
If you have any difficulty in settle your payment with us, please contact our Customer Service team via:
Skype: [email protected] (Intell Centre Customer Services)
Email: [email protected]
Facebook: https://www.facebook.com/IntellCentre/