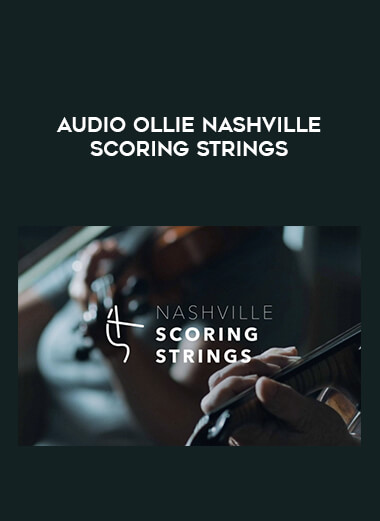 Featuring Nashville’s finest string players at Ocean Way Studios — a world class scoring environment — we dedicated over two years to capturing the expressive performances of the incredible musicians we worked with.

Using performance-based sampling techniques, we were able to preserve the subtle details and expressiveness found in real live recordings, all while maintaining the sense of depth found in the room. Every note was analyzed in real time during the sessions to make sure we maintained timbrel consistency.

All of the short articulations were sourced from repetition-based performances to maximize fluidity and connectivity. Legato transitions were sampled from musical phrases to translate a level of expression resembling that of a real piece of music. Every aspect of this library was treated with utmost attention to detail and the results are unparalleled.

Focusing on the core strings articulations, Nashville Scoring Strings covers the main playing styles associated with modern film score. We prioritized a level of quality over quantity in these major performance types with the goal of creating a new benchmark in core string libraries. Recorded by scoring mixer Nick Spezia (Call of Duty, Fortnite, Outlander), we captured the sound found in many well known movies, TV shows, and video games. We made every effort to push the limits of what is currently possible with sample library development. We are incredibly proud to present Nashville Scoring Strings!

We approached sampling Nashville Strings through actual performance-based phrases. All of the short articulations were sourced from real repetitions, and the legatos were captured from actual melodies. The result is a stellar level of fluidity and musical expressiveness.

Windows 10, Intel Core i5 or similar

Be the first to review “Audio Ollie Nashville Scoring Strings” Cancel reply
Digital Delivery
We are using Paypal for our auto-payment gateway.
If you have any difficulty in settle your payment with us, please contact our Customer Service team via:
Skype: [email protected] (Intell Centre Customer Services)
Email: [email protected]
Facebook: https://www.facebook.com/IntellCentre/

$59.00
Start typing to see products you are looking for.
Home
Shop
0 items Cart
My account