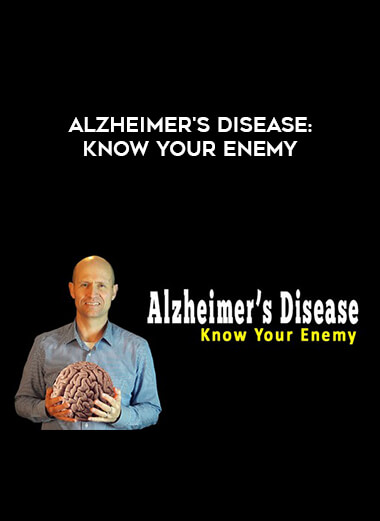 Alzheimer ’s disease is a global killer, affecting more that 50 million people worldwide today. That number is also expected to double in the next 20 years as the world’s population ages.

In developed Countries Alzheimer’s is now the third biggest killer according to the World Health Organisation.

In people who are 85 years or older we find that almost half start showing symptoms of Alzheimer’s.

Dementia, for which Alzheimer’s is the biggest contributor, is not a normal part of aging. Yet it affects more than 10 million people each year. That’s a number bigger than some countries entire populations.

Researchers have identified many potential causes, and from all the medications developed none have proven effective in curing the disease.

Your best hope lies in prevention not a cure, which means, your future rests in your own hands. You can’t wait around and hope that someone comes up with a magic cure.

This course will give you what you need to know about Alzheimer’s disease, so that you can learn about one of the world’s biggest killers and start a process of protecting yourself against it by building your own preventative strategy.

Join me today as we explore this topic and discover what we can do to improve our chances of living into our golden years with our memories intact.

Be the first to review “Alzheimer’s Disease: Know Your Enemy” Cancel reply
Digital Delivery
We are using Paypal for our auto-payment gateway.
If you have any difficulty in settle your payment with us, please contact our Customer Service team via:
Skype: [email protected] (Intell Centre Customer Services)
Email: [email protected]
Facebook: https://www.facebook.com/IntellCentre/

The Selling Family – 5 Courses – Learn How to Sell on Amazon

Jon Rappoport – Power Outside The Matrix

$11.00
Start typing to see products you are looking for.
Home
Shop
0 items Cart
My account